Kaleidoscope is finding its feet at Russborough House 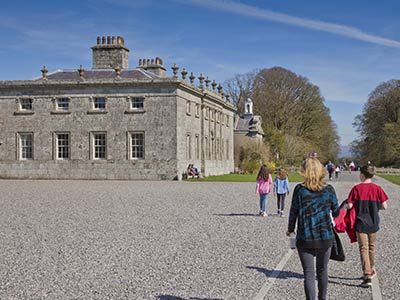 Ireland’s first family festival is coming to Wicklow this weekend

Kaleidoscope, a three-day festival targeted at families is coming to Russborough House this weekend and all eyes are on a festival that is tailored to families, especially instead of a festival with a side order of family considerations! Kaleidoscope was born after event organisers of Electric Picnic saw a gap in the market for a targeted family festival. With parents being more open minded, kids can attend the festival with parents for a cool and hip weekend full of activities and incredible experiences. And if you are worried about the little ones there is a ‘baby disco’ and meditation too with Kaleidoscope’s wellness programme for parents and babies.

In terms of location, it is understandable to see why Russborough House was chosen as the backdrop to this exciting festival. Russborough House is close to Dublin (a mere 20km away) and Russborough House has the credentials to host a major event in the summer calendar,. The festival is perfectly timed, at the end of the school year for younger children and promises to offer lots of fun to festival goers.

Russborough House and its history

Russborough House is widely regarded as one of the premium Palladian houses in Ireland and it was originally built in between 1741-1750. In the 1950s, Russborough House was bought by Sir Alfred Beit who was an heir to a diamond mining business and he also was the proud owner of an extraordinary art collection. Sir Albert Beit brought the infamous Beit art collection to the house but they faced some problems with robberies and some of the paintings were donated to the National Gallery of Ireland in the 1980s. Sir Alfred and Lady Beit were by all means a powerhouse of a couple but they truly loved Russborough House and without their huge generosity the public may have never seen the beauty and wonder of Russborough House. It was in 1978 that the house and grounds opened its doors to the public.

It began with guided tours and since then it has grown to be a hugely popular tourist attraction in Co. Wicklow. With its views of the Wicklow mountains and Blessington lake, Russborough House wins over visitors for its natural beauty and charm. The house itself is wonderful and its ability to retain its luxurious furniture, fine carpets and silver to name a few is one of the highlights of every visit. The Beit collection of paintings are much loved and they – along with a fantastic staircase, made from mahogany and the high ceilings make this house a ‘must see’.

And rather smartly, Russborough House has paid attention to advances in technology and evolved with the changing expectations of visitors that derive from all over the world. In 2011, they began a self-guided exhibition putting interactive touch screens, audio handsets and films in the cinema. They created lovely 3D photographs and 2D films taken by Sir Alfred Beit when he travelled the world during the 1920s and 1930s. This particular area of the house is hugely popular and Sir Alfred loved nothing more than showing his adventures to friends.

Russborough House hasn’t forget its historic features and nor does it forget its surroundings with an exhibition part dedicated to the Earls of Milltown (all six of them!) who lived in the house as well as historical stories about the Blessington Tramway. There is a 2000 metre Beech hedge maze on the grounds, and it is a favourite amongst inquisitive kids and competitive families. Russborough House boasts one of the top playgrounds in the country, as voted by the Irish Times. For fairy fans, Lady’s Island is an enchanted home to magical beings and it is steeped in interior design and decor! A building that is 150 years old was once used for training horses and visitors can experience the history of it. Russborough House often runs workshops regularly too. More recently, the National Bird of Prey Centre was opened to provide an outdoor educational centre where eagles, owls and hawks could be seen by the public. For dog lovers, the Sheepdog Demonstration is a real treat and witnessing the abilities of border collies is incredible. There are so many things to do in Russborough House and you can find out more on their website.  Main photo credit: Russborough House.

What can people expect from the festival?

Russborough House is a stunning place and it will transform its terrific landscape into different stages for acts and they have even tailored areas that are specific to children’s ages. With several stages of live music showcasing acts and DJs there are lots of options to keep all the family entertained. Not forgetting there will be food, sports, art, carnivals and even a cinema. The best part is that everything is for families so everything that is on site will be attractive to young kids, older kids and their parents too. Some music acts include, Ryan Sheridan, Hermitage Green and Imelda May and with yoga, massages, cycling, comedy and disco promised there are lots of things to get excited about with Kaleidoscope.

Find out more about Kaleidoscope here.