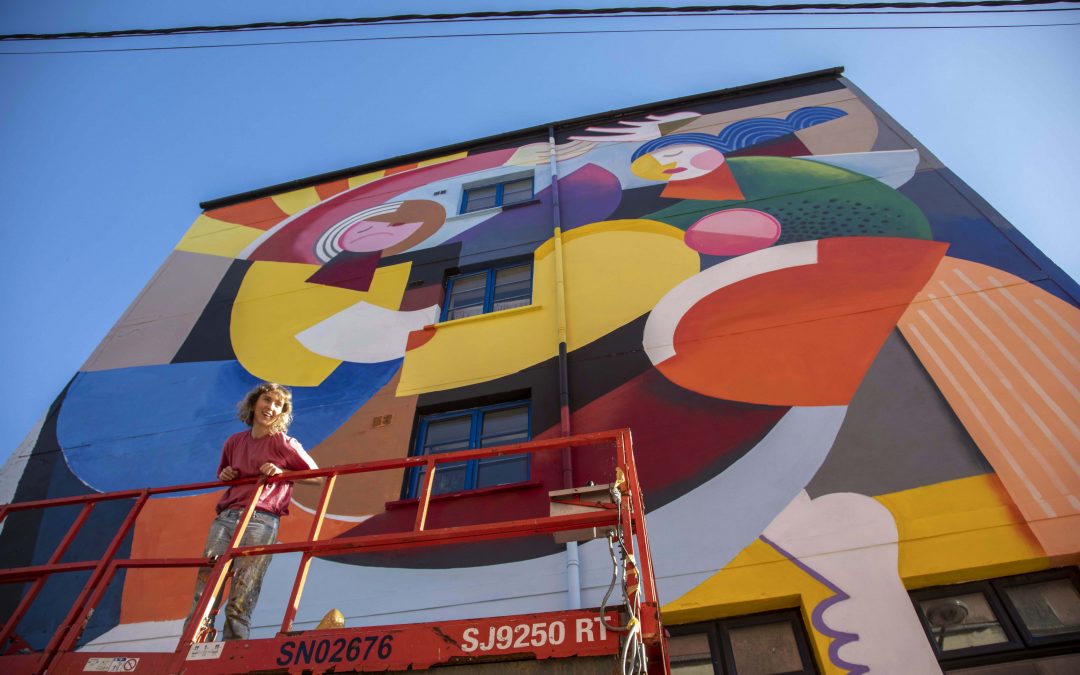 Due to phenomenal community engagement and support, the event returned in 2021 with four more walls unveiled by Shane O’Malley, Friz, Conor Harrington, and Asbestos.

Over the past few weeks, the Ardú crew took to the manlifts and ladders, and now reveal three more large scale murals in the city by some of the most exciting names on the international scene – Claire Prouvost, Kitsune Jolene, and VENTS137. 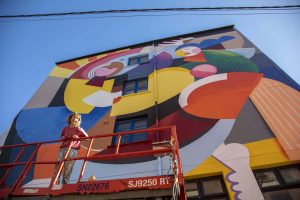 “The design is inspired by the Firkin Crane dance centre around the corner. This mural is a hint to the location of the iconic building. I wanted to represent the energy and movement of dance, music, theater and performance arts, and how it connects human beings. Cork and Ireland overall have an ancestral culture of dance and music that is still evolving to this day, from traditional to more contemporary performances. The cheerful colour palette is a visual representation of the various artforms as well as the impact of dance on our wellbeing, for both the performers and the public.” 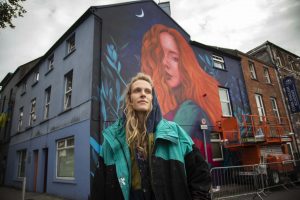 “The mural I’ve painted is a twist on the mythology around Celtic mother goddess Danu, combined with the river Lee running through Cork alongside my piece on Sullivans Quay which reflects the Milky Way on clear nights.

I like to think that even today, no matter who you meet or cross paths with on the streets, they could be gods in disguise. These ‘modern classics‘ are a lot of fun for me to do as a take on that. The woman I’ve painted is a bit anonymous with just the sliver of her face visible, adding to the notion she could be anyone, passing through the streets of Cork. The stars and galaxies are spinning out of her red hair as a nod to the movement and flow of the river, the heart and soul of Cork City shaping and defining the energy of the city.”

“The truth is not known, beneath the sky of stars, Whether they were of heaven or earth.”  Line from a poem out of The Book of Invasions (Lebor Gebála Érénn compiled c.1150) 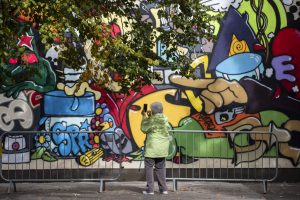 “This mural represents 40 years of experiencing cork, a far cry from an outsider, yet born on the other side of the sea. Deep in a heritage from both sides, life so similar yet so different. A youth spent in dusty back-room bars, listening to stories from my grandma of a bygone age. The illuminated bar lights on the walls outside, the melee of cheer and excitement contained within. The black booze, the white puffs of smoke, those crisps!

Introductions to wall writing from names I’d never meet to those long since gone. Friendships and lifelong connections spawned from spray painting graffiti pieces across the road in White Street Car Park. I spent many nights and long days painting in here, up ladders and my last piece of graffiti I was involved in painting there is still there as a reminder to all the residents of the new housing of the history that car park represents.

The area of South Terrace and White Street car park is one of the oldest graffiti halls of fame in Irish graffiti history so my wall is a nod to corks history but also the history of this area and the artists who have come through such as Conor Harrington, Maser, Aches and James Earley.Every visit over the years brings a new madness but a warm sense of home.”

These inspiring pieces of work dotted across the city add greatly to the cultural landscape of the city centre. They’ve spurred conversations on the ground, and shared widely online.

Ardú Street Art Project is made possible with generous support from Cork City Council and the Creative Ireland Programme – an all-of-government five-year initiative, from 2017 to 2022, which places creativity at the centre of public policy. Further information from creativeireland.gov.ie